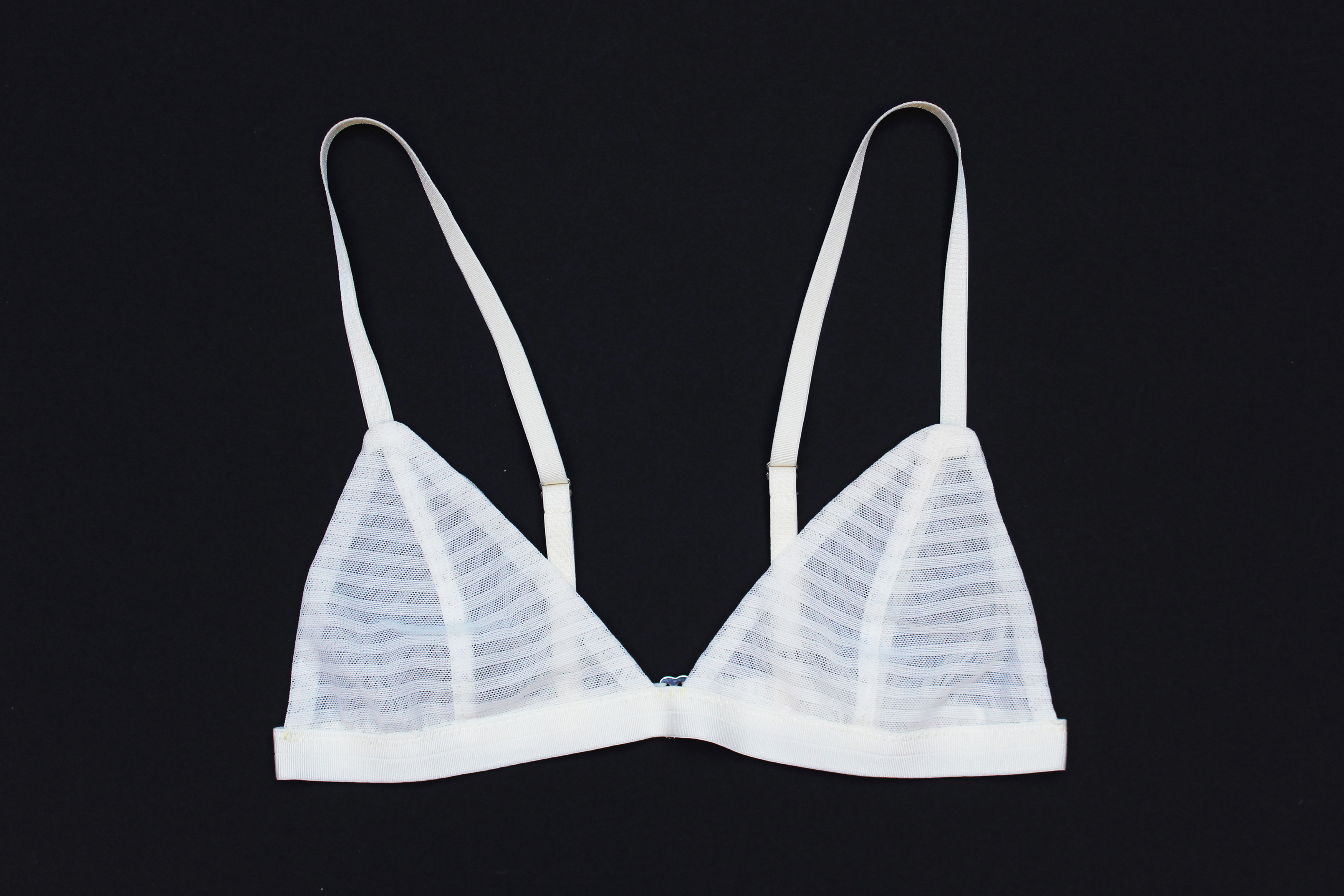 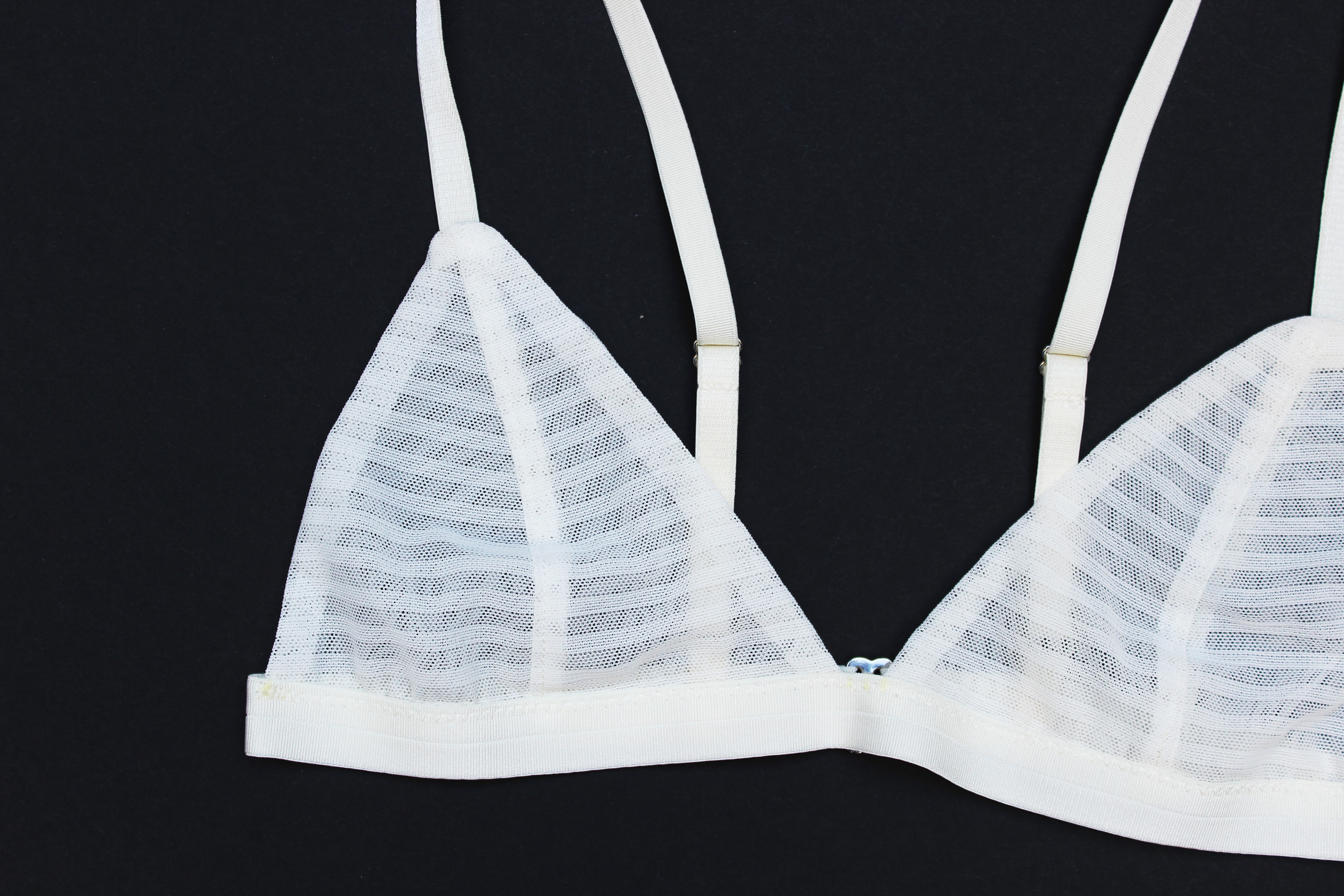 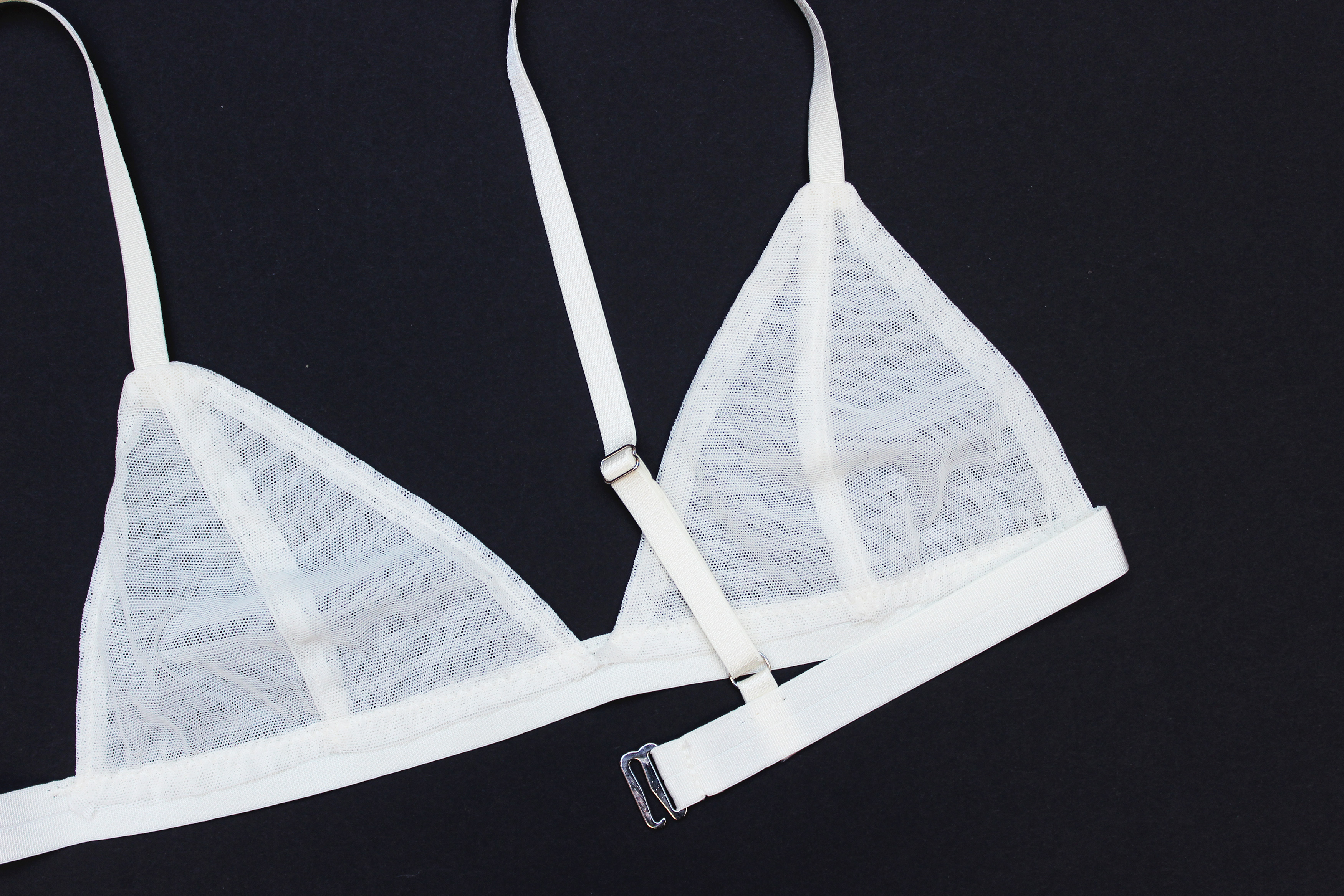 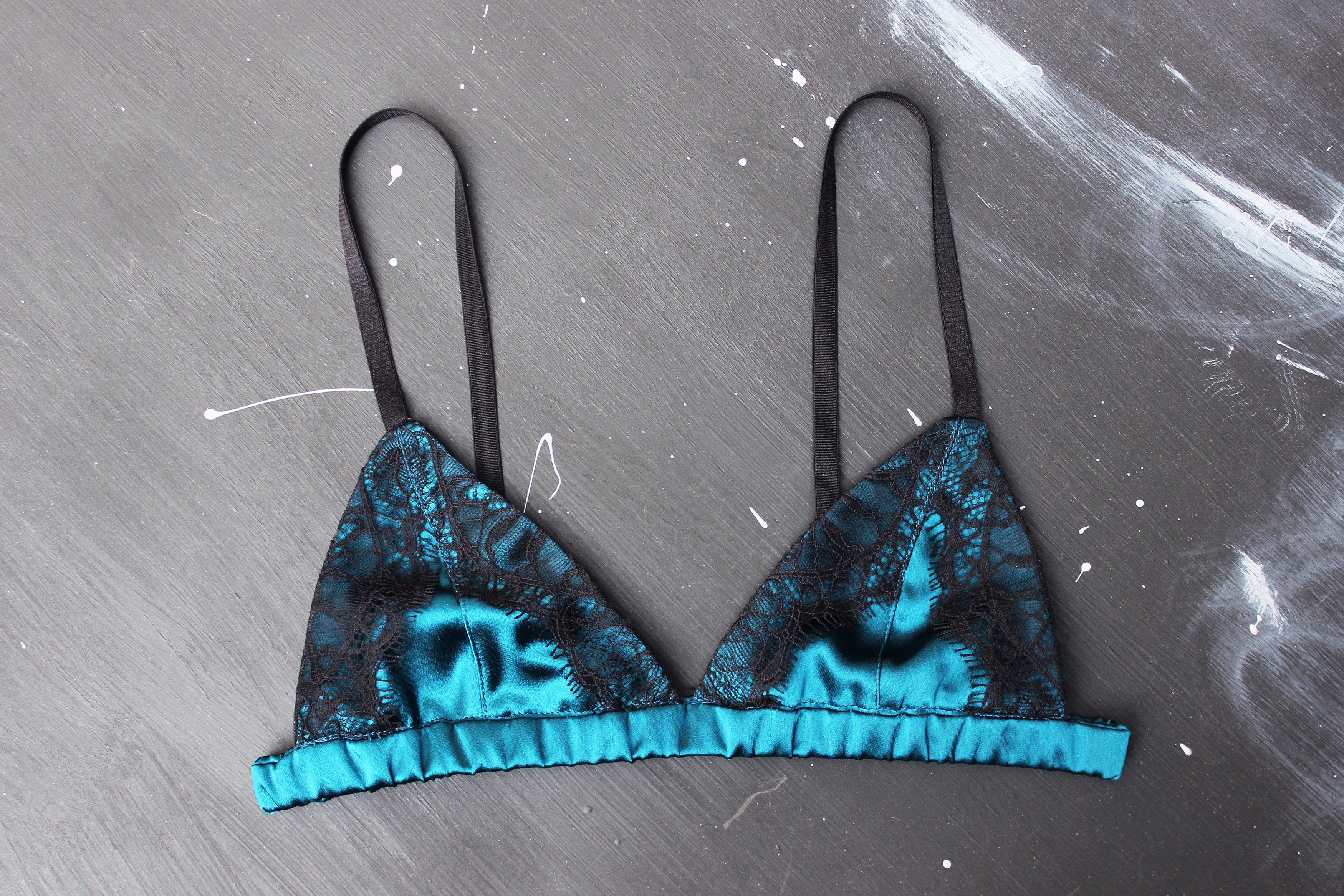 Everyone has a favorite bra style and this triangle bralette is mine: it has sharp angles, clean lines, thin straps and a tiny band. 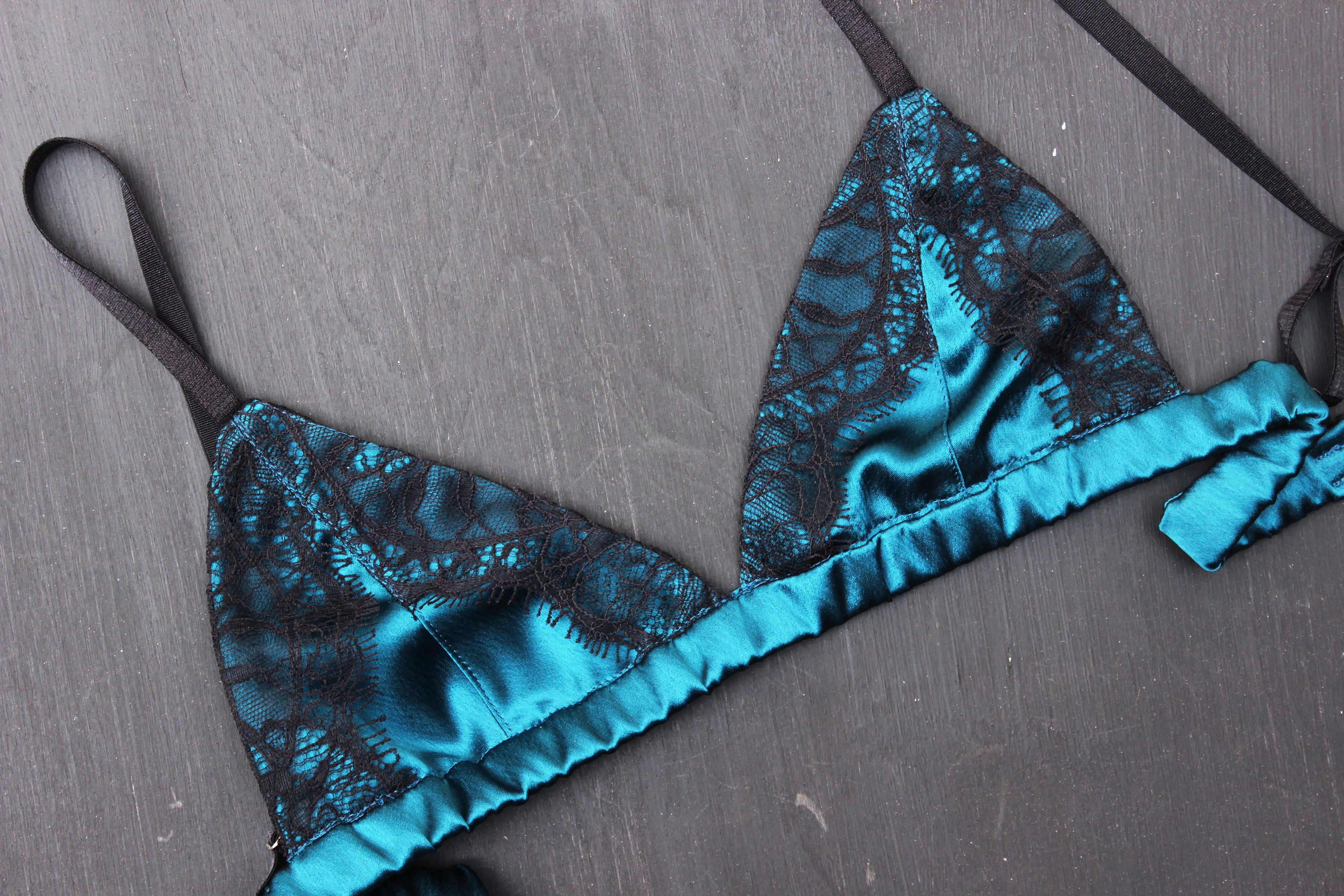 This is a self-drafted pattern. The first iteration can be found here.

For this version, I used a teal satin back crepe, which has the tiniest mechanical give. I also used a black chantilly lace to accent the teal color. I’ve been obsessed with the black/teal combo since I made the Peridot Bralette and Bryony Knickers set found here. 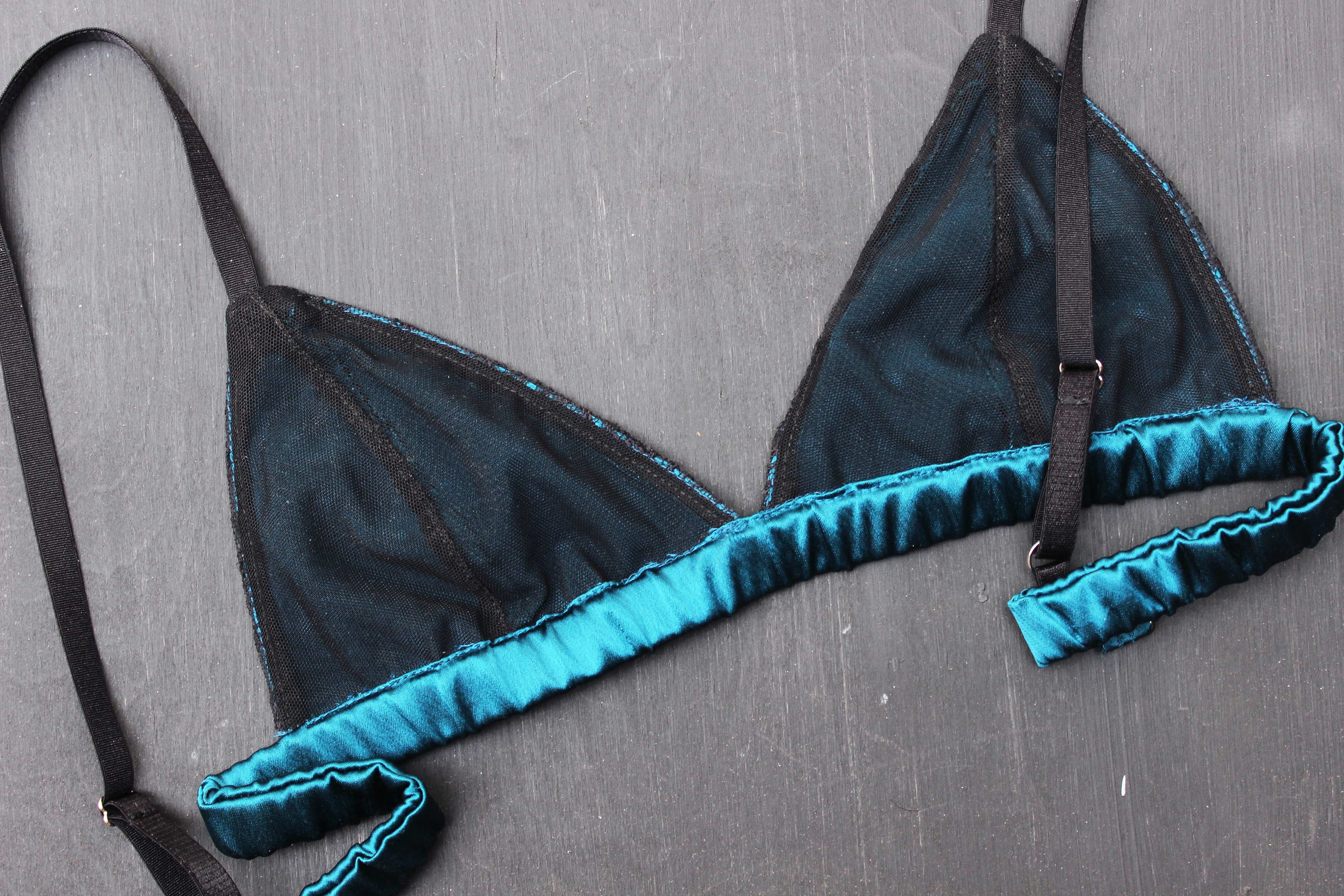 Due to the thickness of the fabric, I opted for a 3/4″ wide band instead of 1/2″. A tutorial on how to create a narrow elastic casing for the bra band is coming soon. Stay tuned! 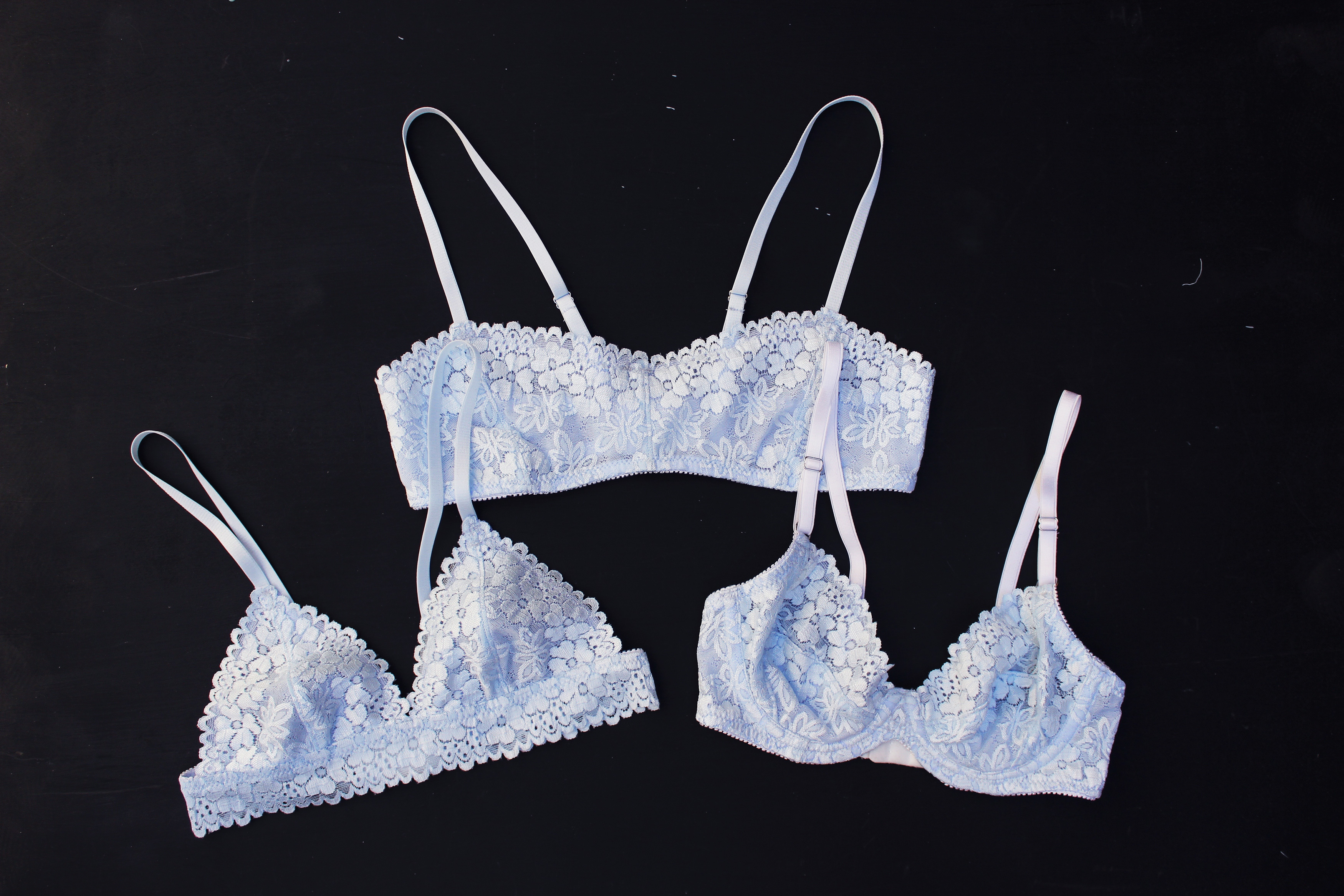 One of the things I love about bra making is that you need very little material to make a bra or a bralette. I only have 2 YDS of this pale blue galloon lace that’s 5″ wide and I managed to get 2 bralettes and 1 bra out of it. (Of course, it helps that I’m on the smaller side.) 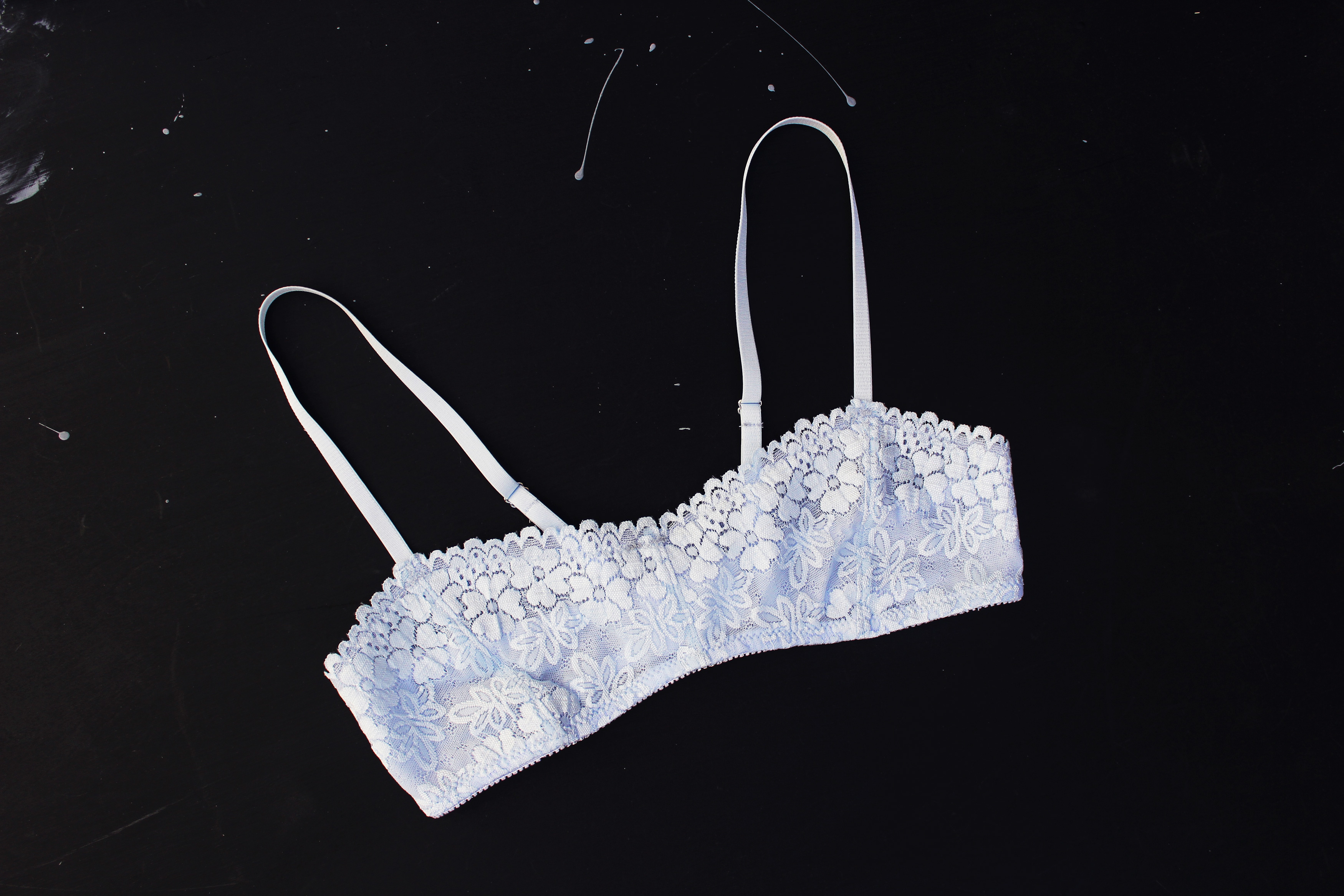 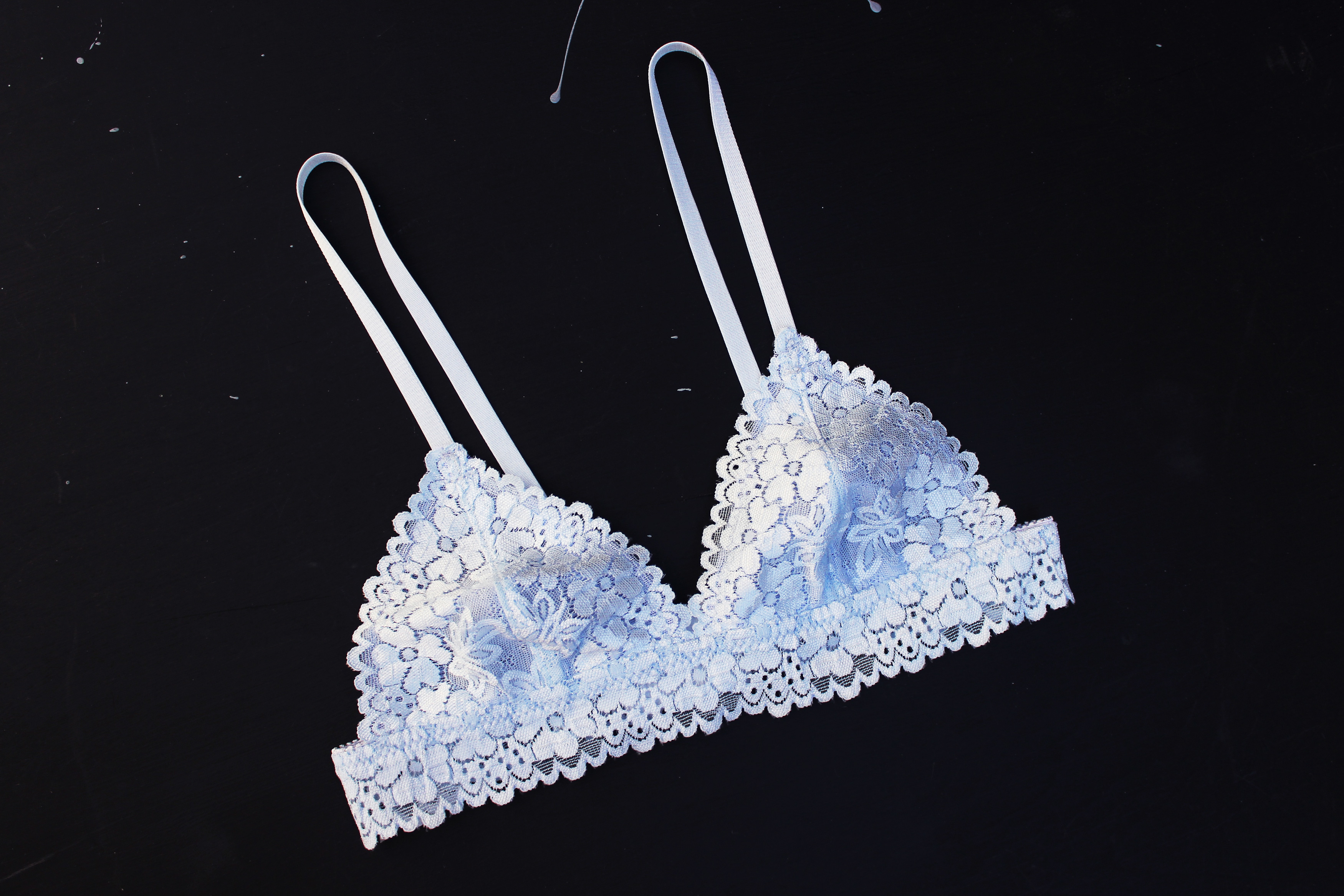 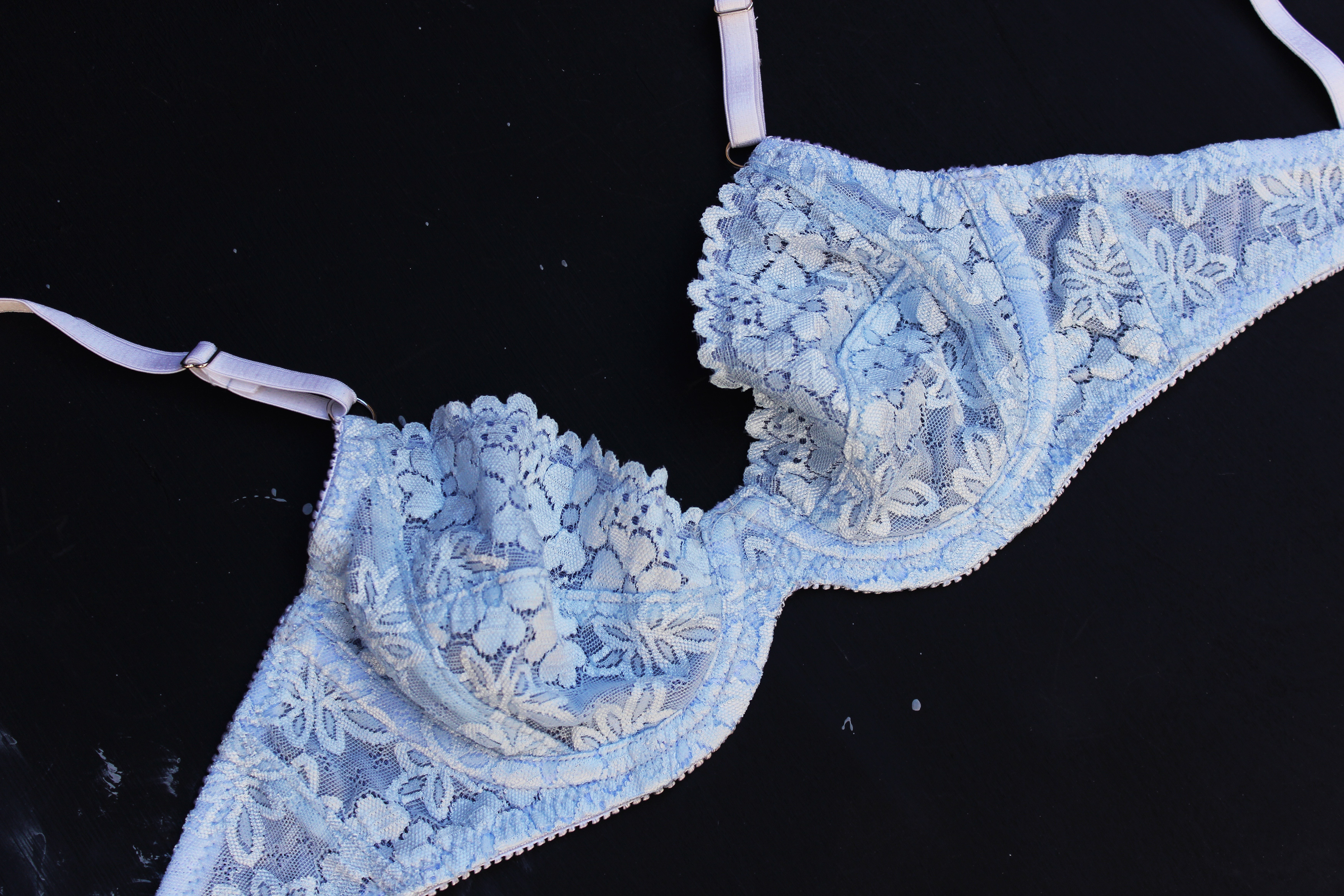 These are all styles that I have made before: self-drafted balconette bralette, Merckwaerdigh Triangle Bralette, and Marlborough Bra. 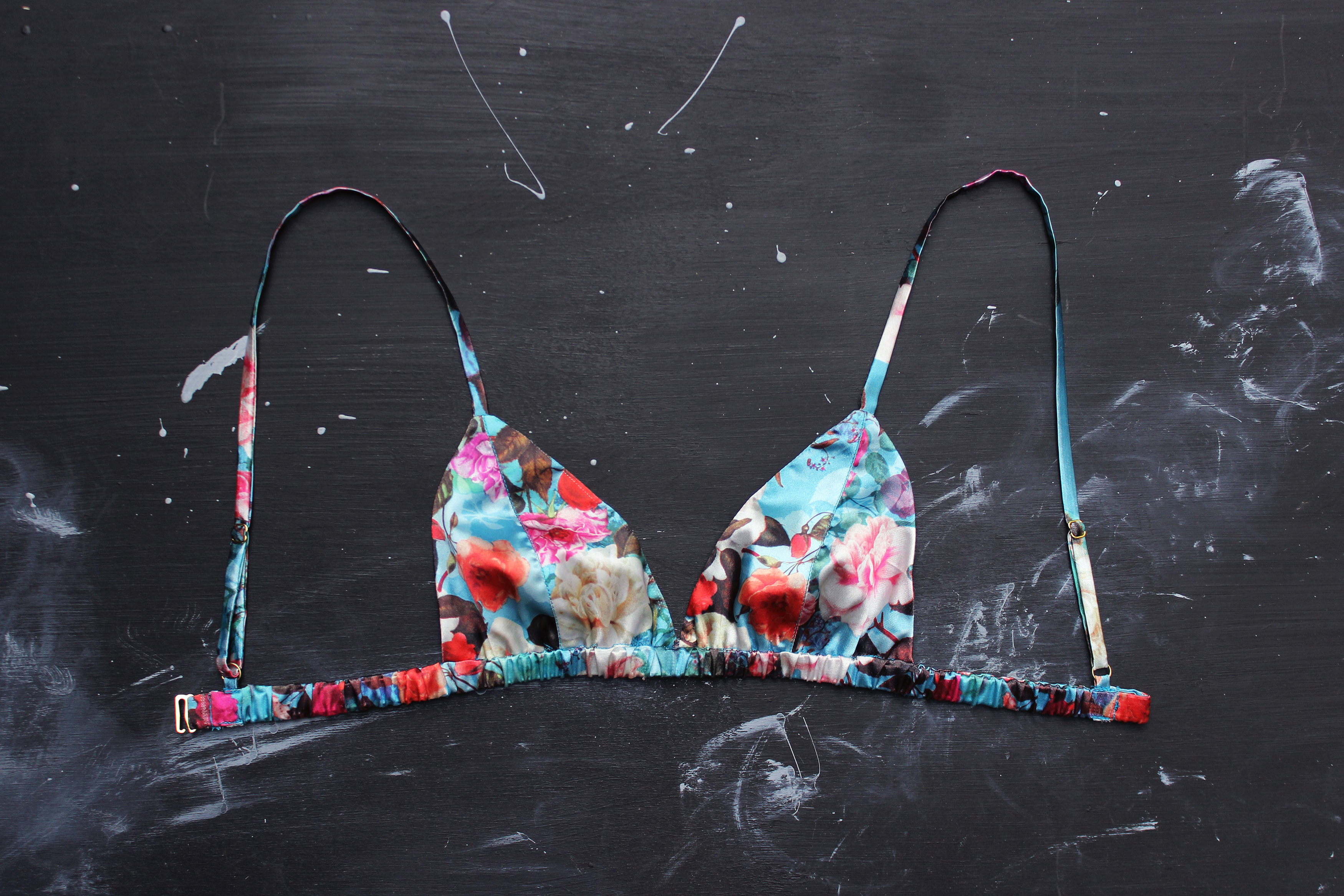 Today’s post features a self-drafted triangle bralette made from a poly floral charmeuse fabric. There were a number of new techniques that I wanted to try out and I kept that in mind while drafting the pattern. 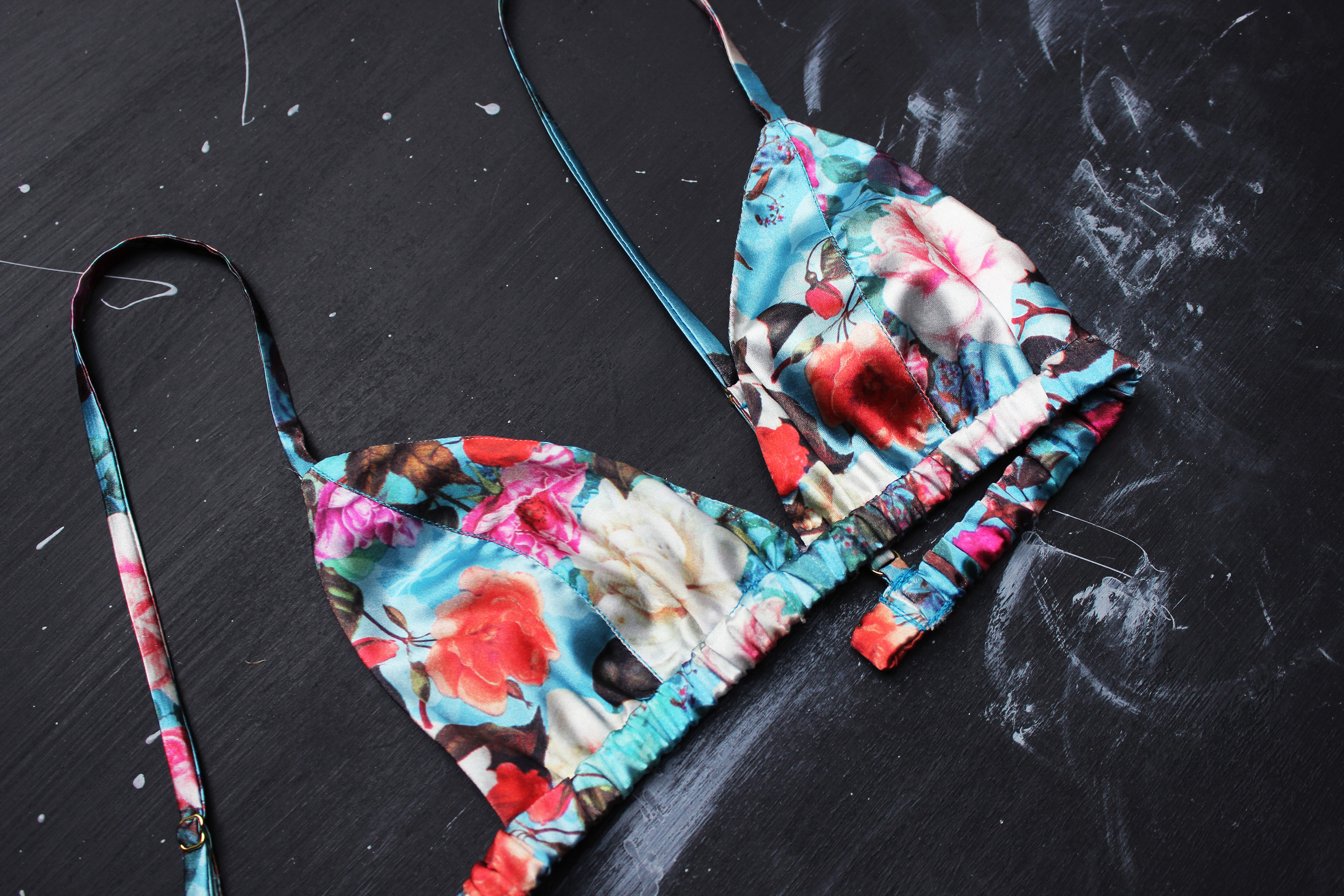 For one, I had been wanting to make thin spaghetti bra straps. I don’t normally make my own bra straps since I have nice strapping elastics in my stash, but this floral fabric has a fantastic print and I wanted to use as much of it as possible. 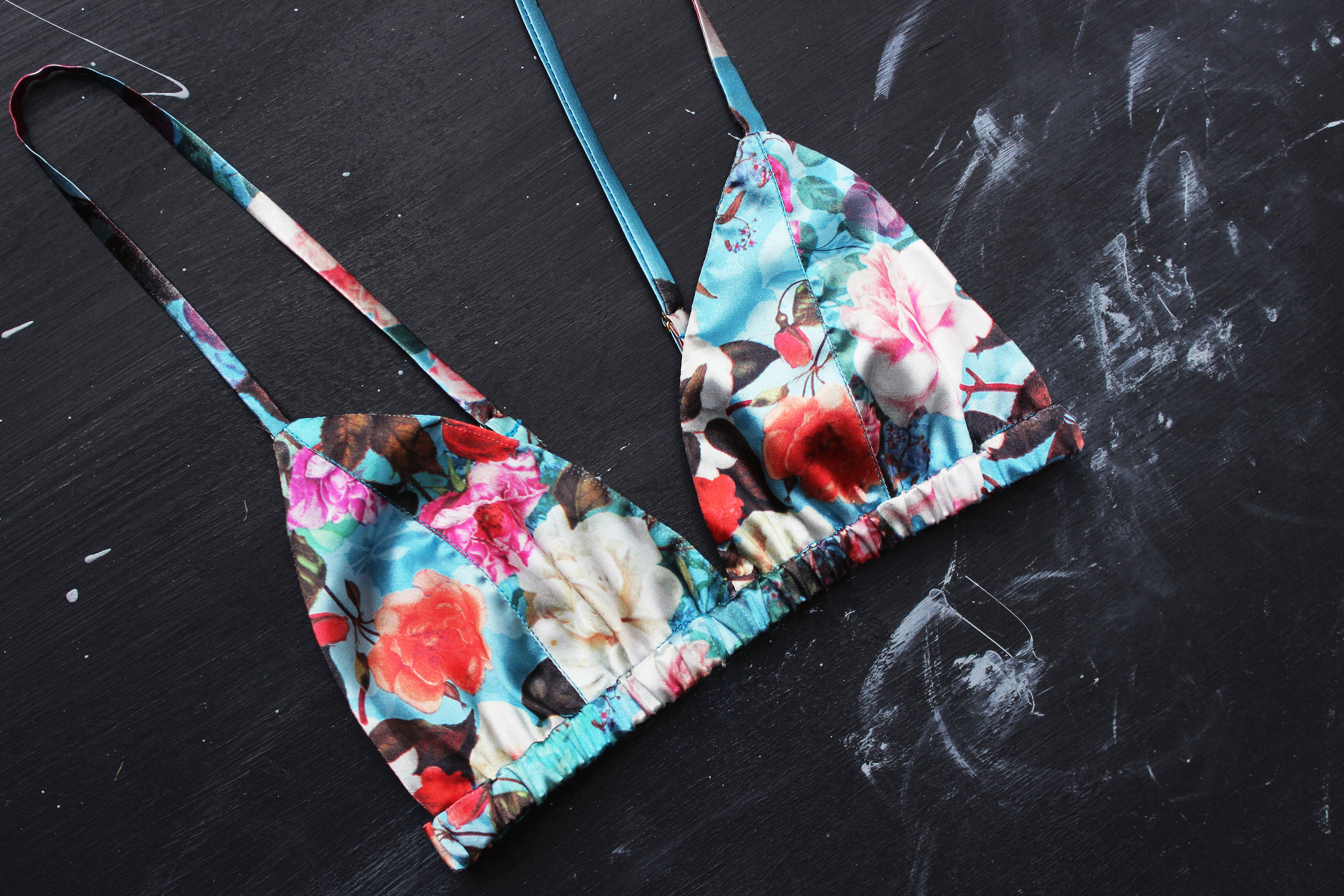 Another new technique I had wanted to try was to create an elastic casing for the bra band. What I learned is that it is extremely difficult to make a narrow elastic band with clean finishing! I wanted an itty bitty 1/2″ band and it was impossible to encase the cups in the 1/2″ casing and then turn the bralette right side out. I actually tore the band fabric the first time I attempted to set the band. 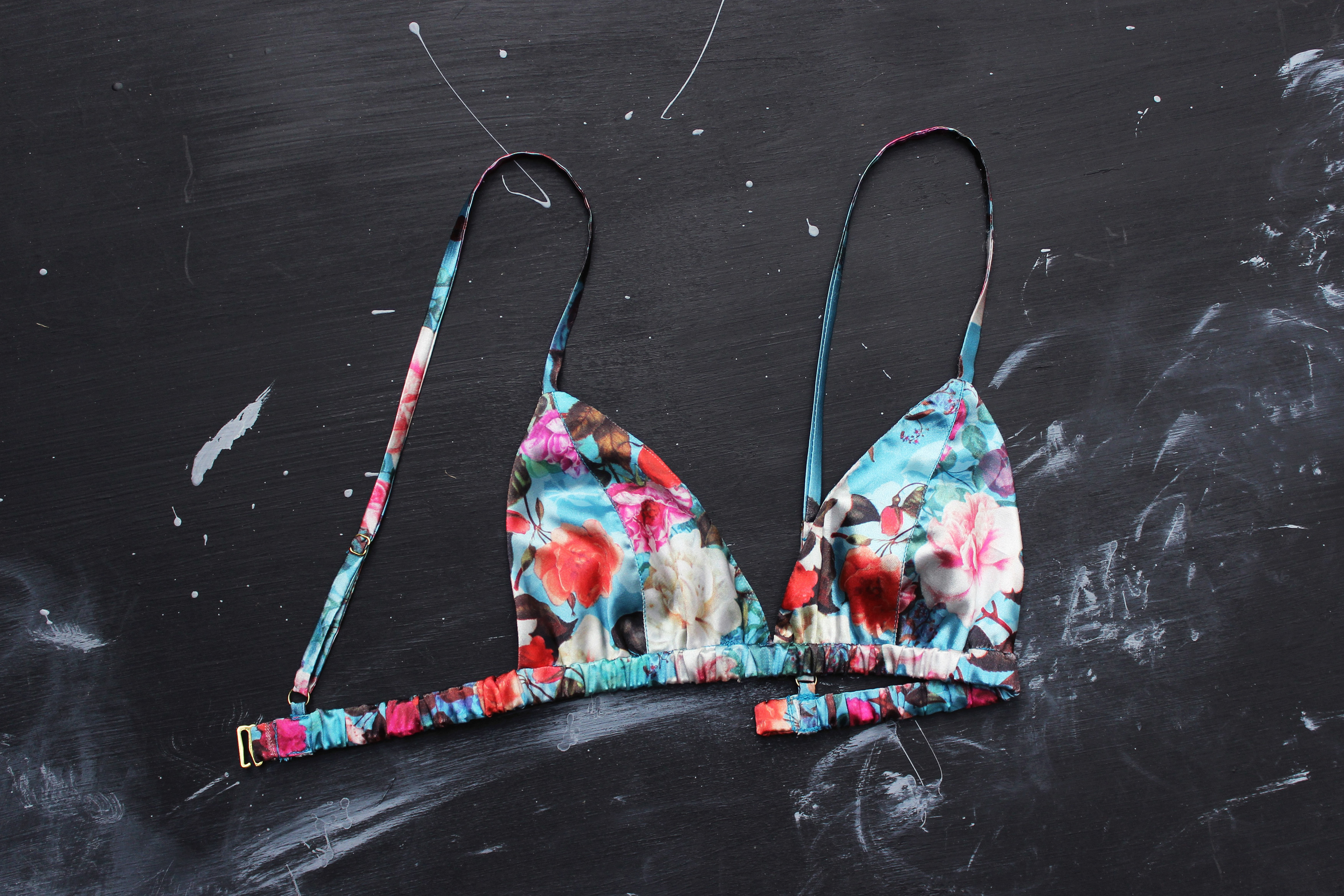 Without going into too much detail (because there’s a tutorial forthcoming), I managed to set the band on my second try. 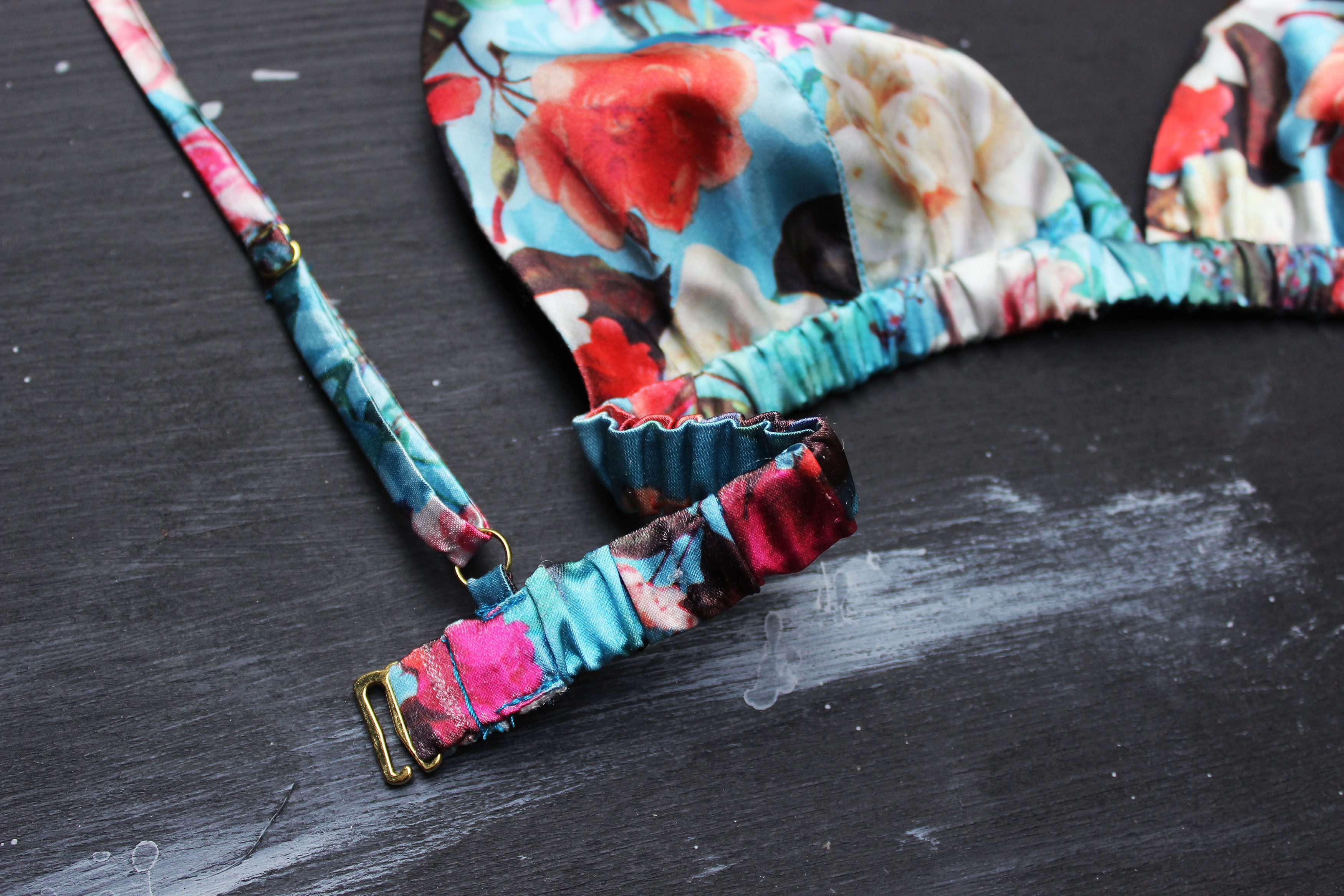 This is the first iteration of what I think will be a staple triangle bralette style in my closet. I envision that this style will work quite well with silky/satiny fabrics with slight stretch to them.

I also made the elastic too short…will add about 1″ – 1.5″ of elastic to the band when I make the second iteration. 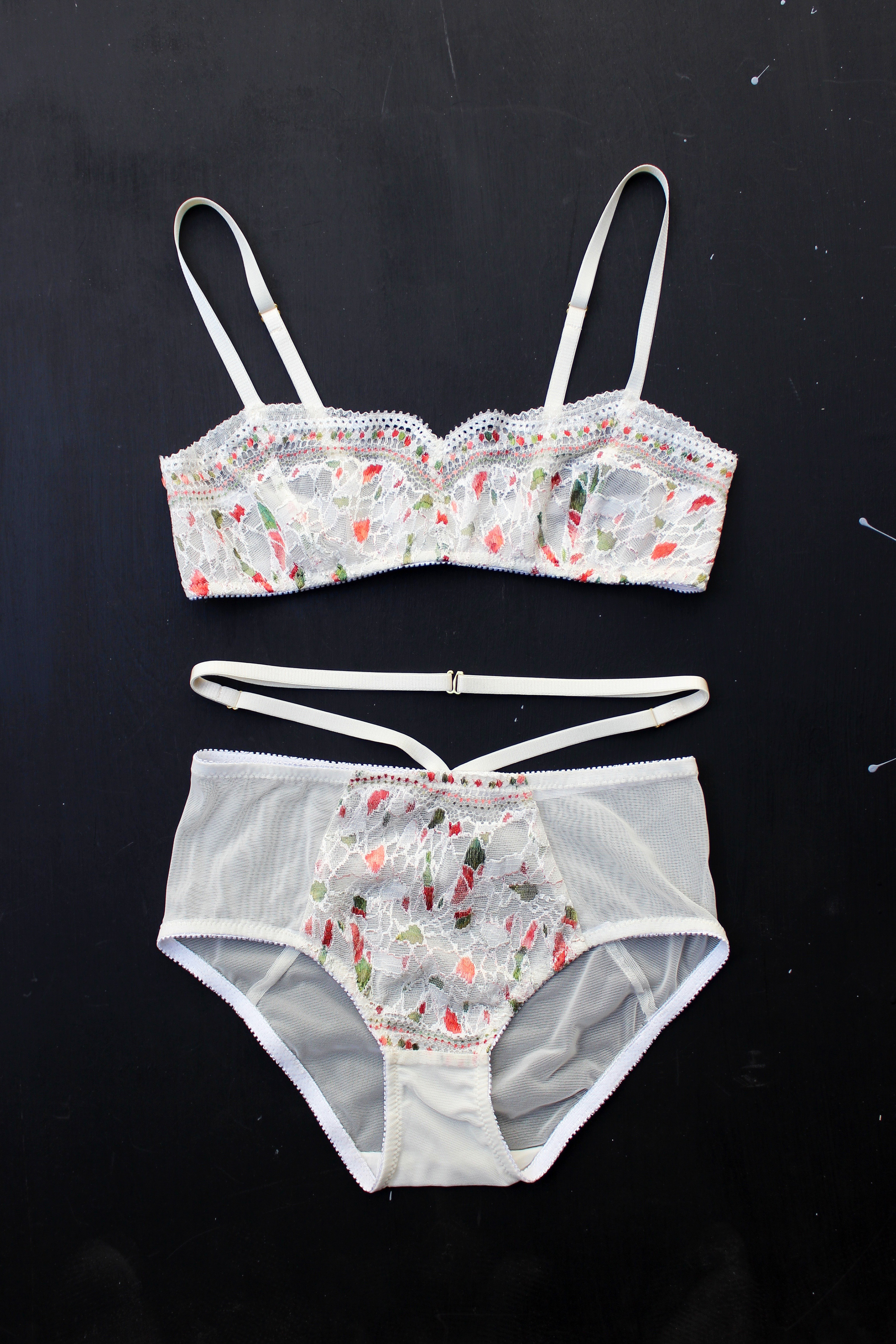 This red/green/off-white lace is from a Merckwaerdigh Bra Kit that I bought a long time ago. I loved the lace so much that I actually bought two of the same kits so I could have more of this lace. I used some over a year ago to make this Watson Bra, and then I hoarded it away for a worthy project. I finally pulled it out from my stash this year to make this set. 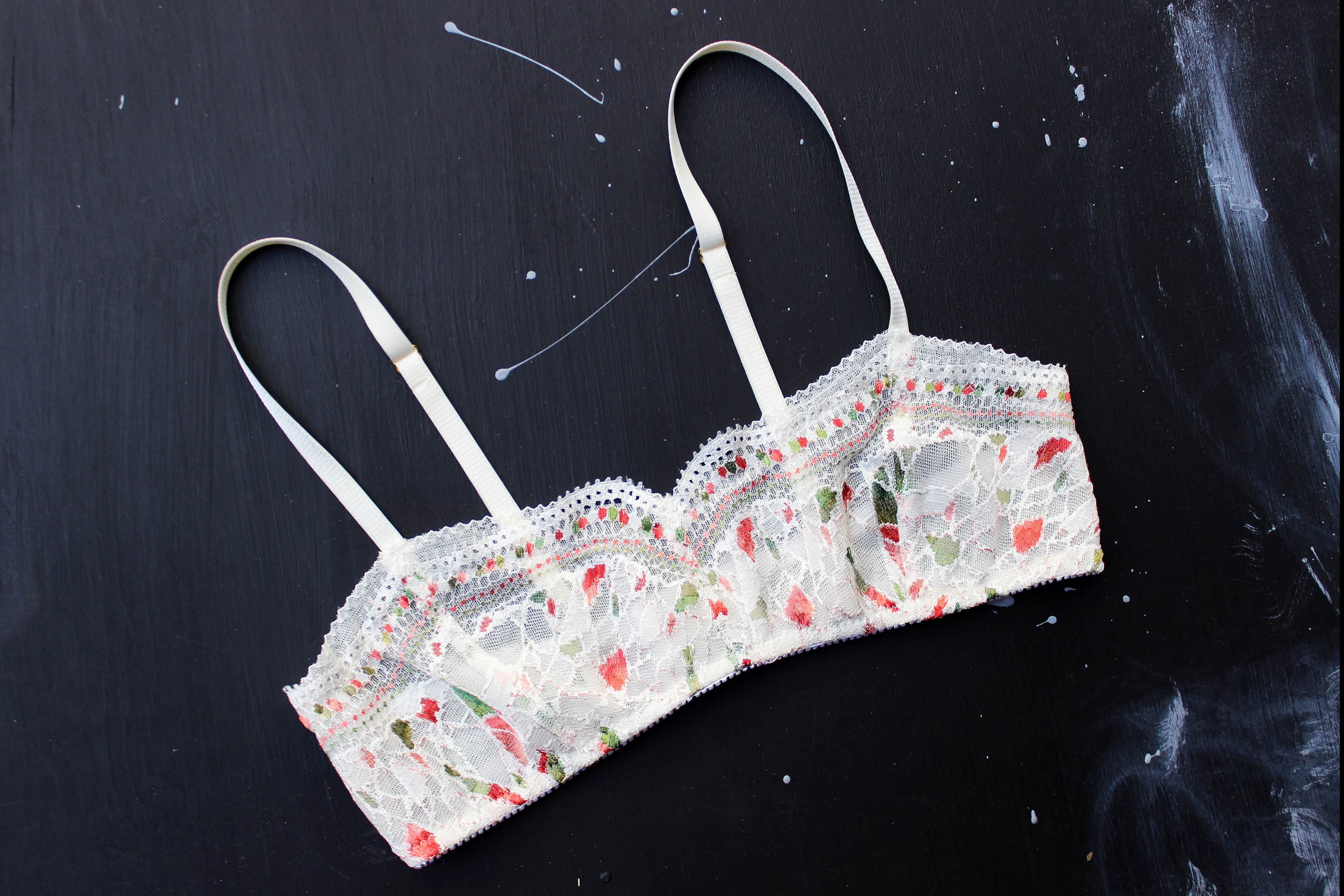 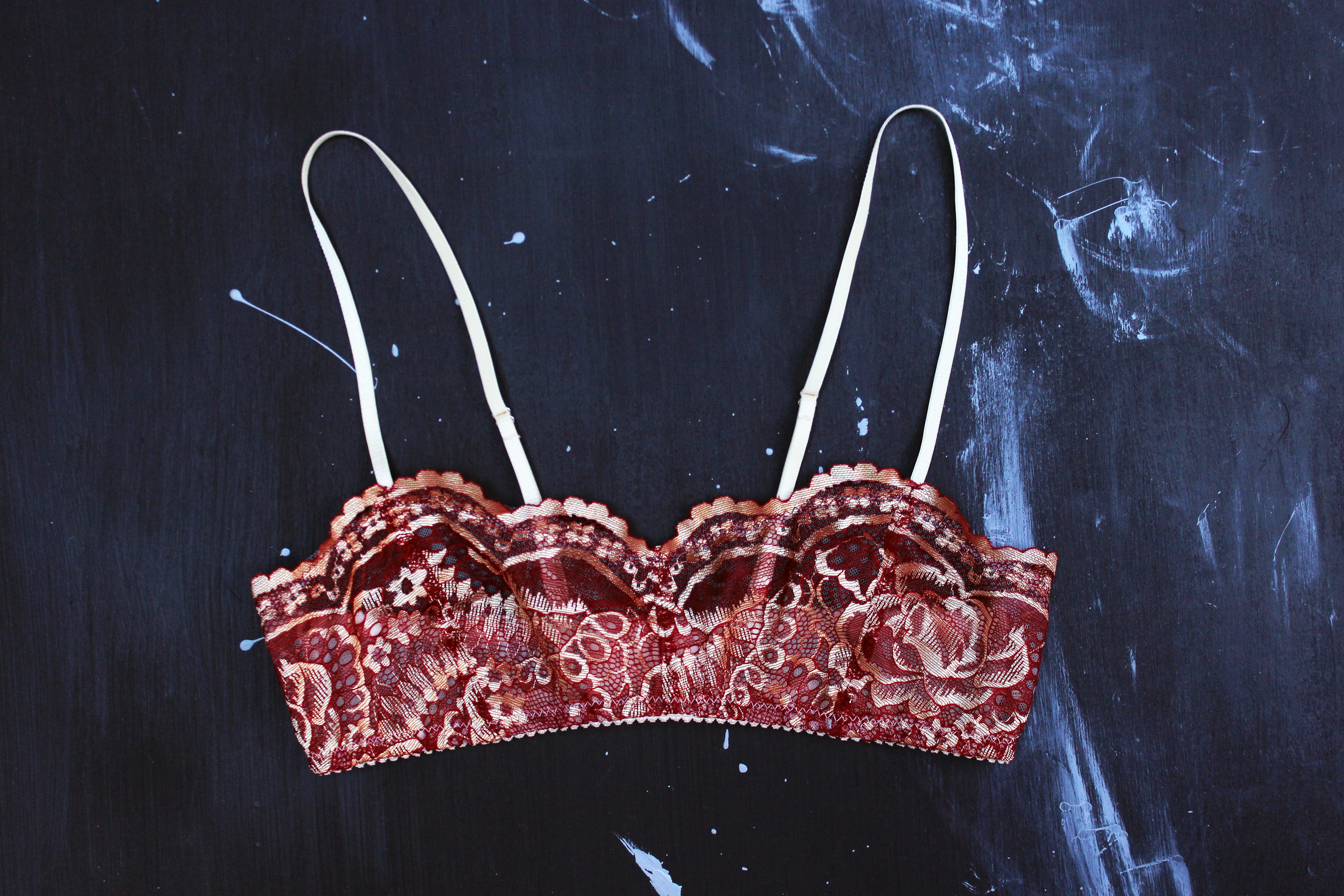 Happy Wednesday! I’m back with another balconette bralette. This time, it’s made from a gorgeous red/gold lace from The Emerald Studio. 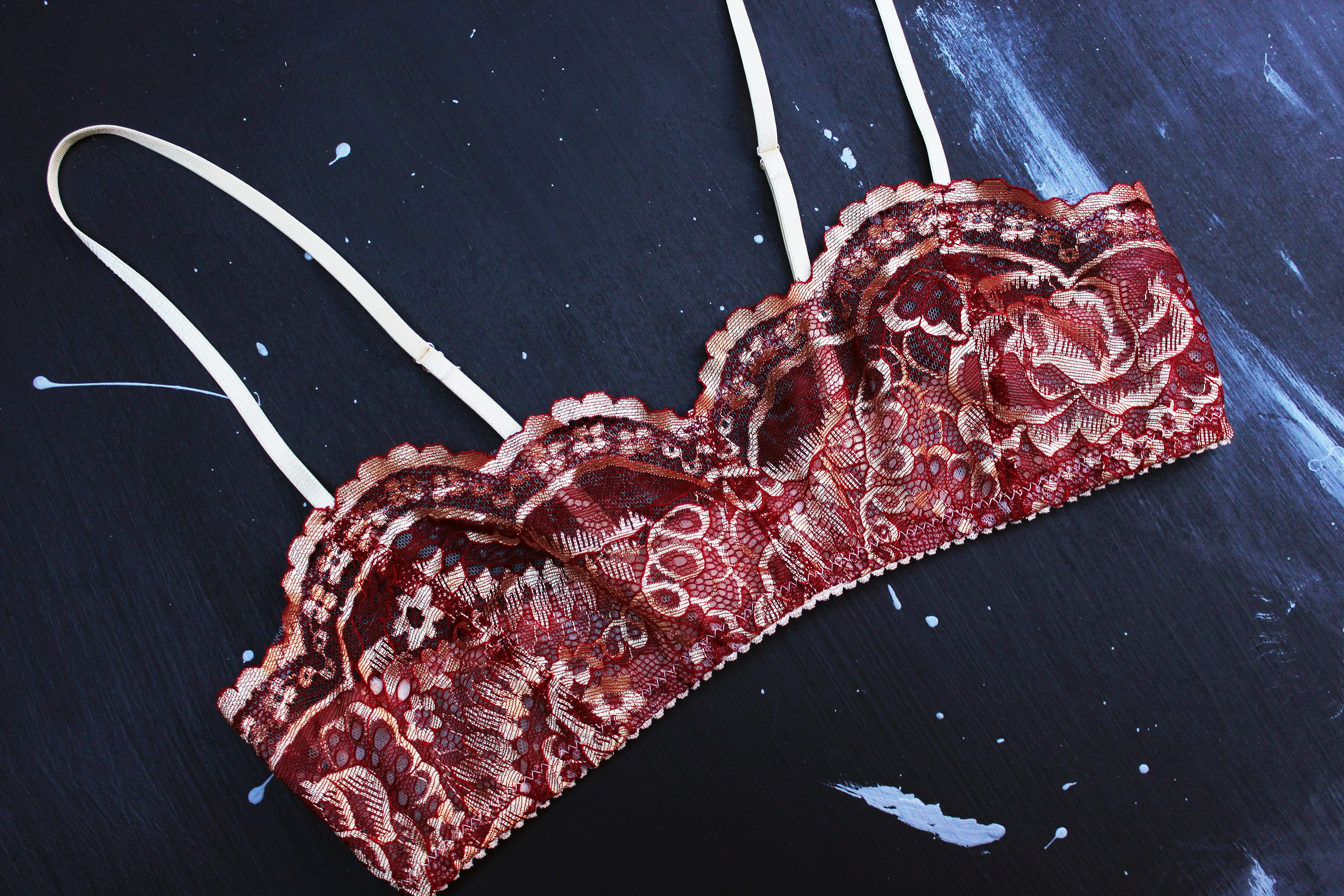 When I received the lace, I knew I had to make it into a balconette bralette. I designed the style to work with non-stretch laces that have scallop edges and this lace fits the bill perfectly. 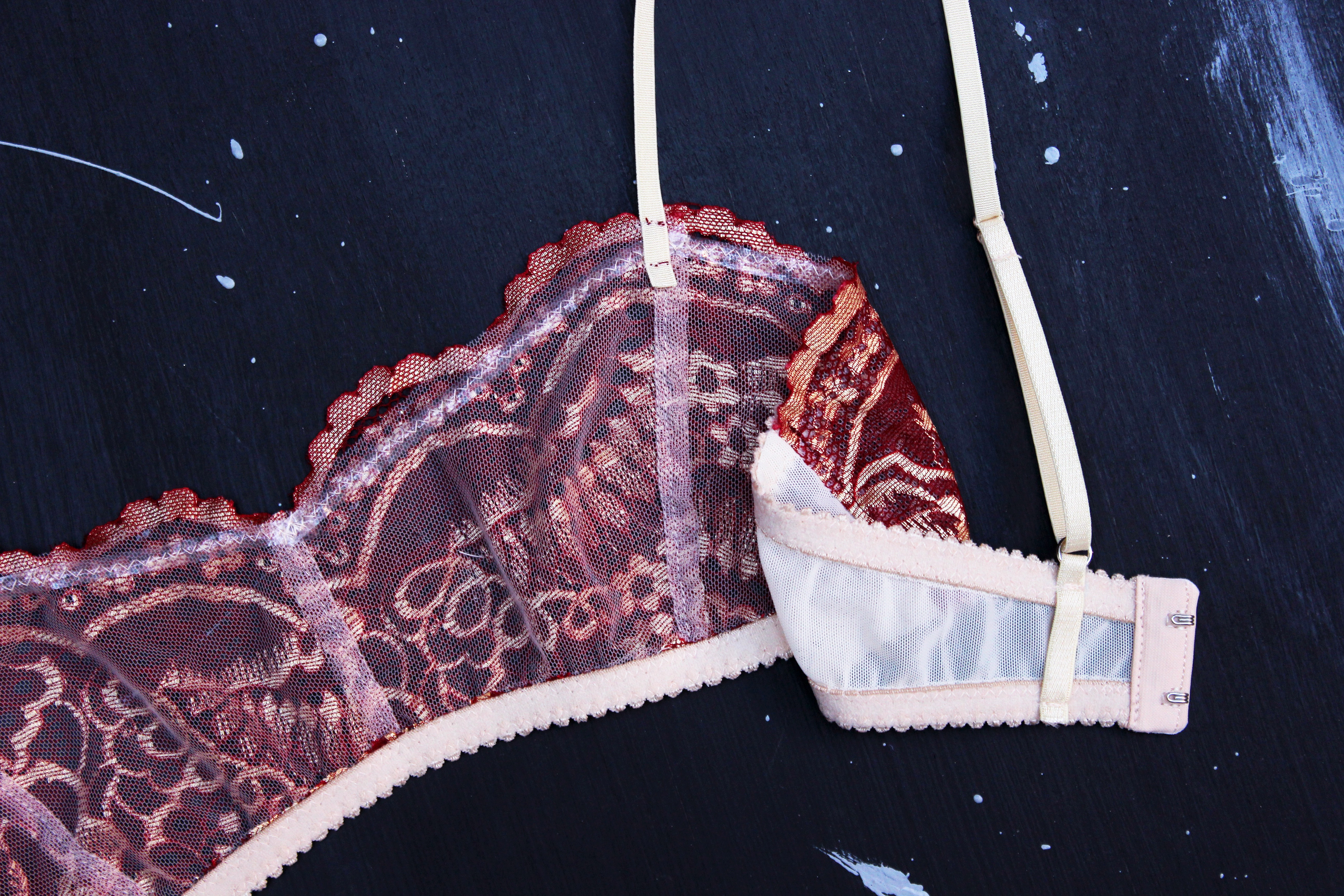 Also, I must confess that I’m pretty obsessed with this shape right now so you may see a few more of these balconette bralettes in the coming posts. 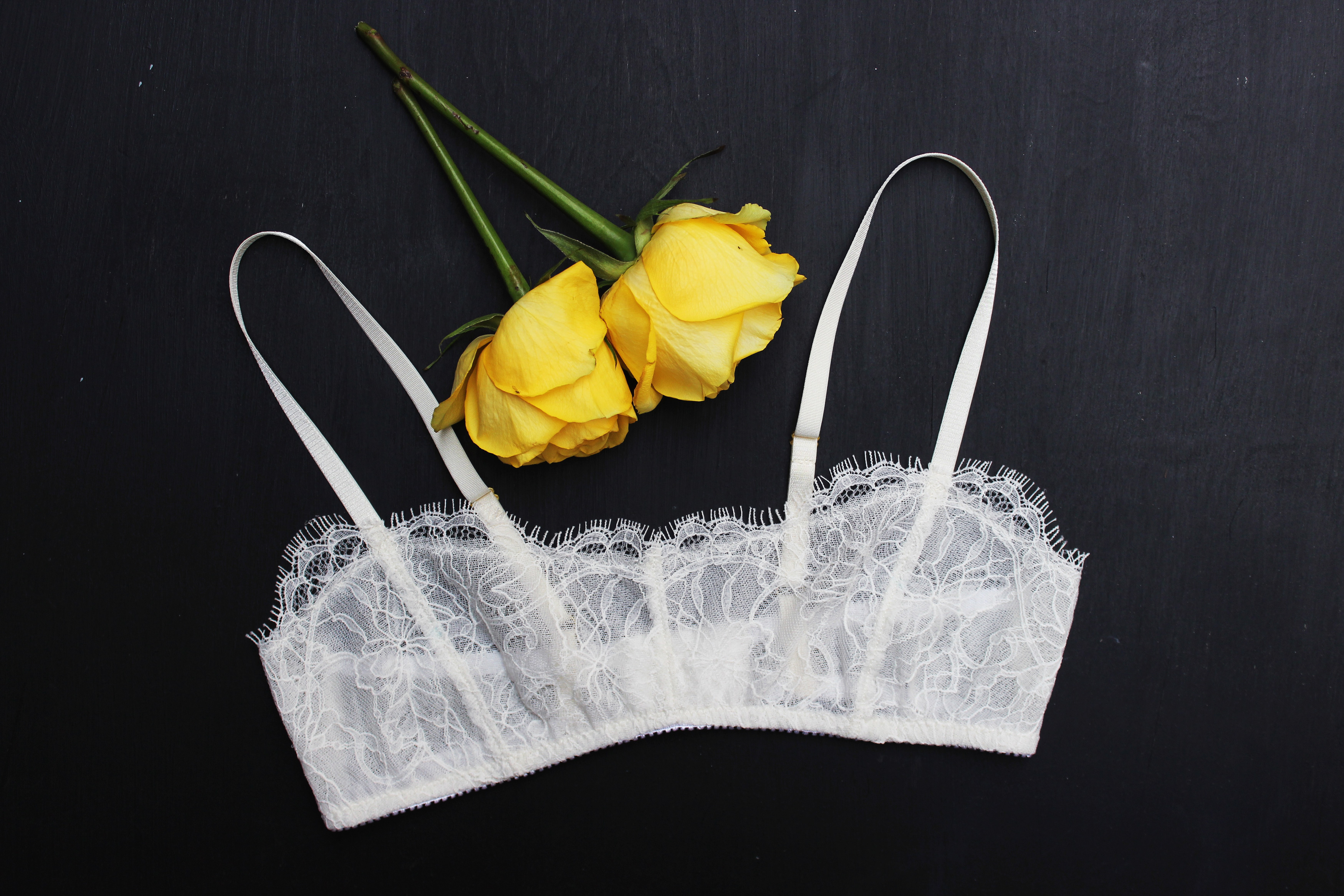 After making so many triangle bralettes, I wanted to try a new shape. Using my own measurements, I drafted this balconette bralette. 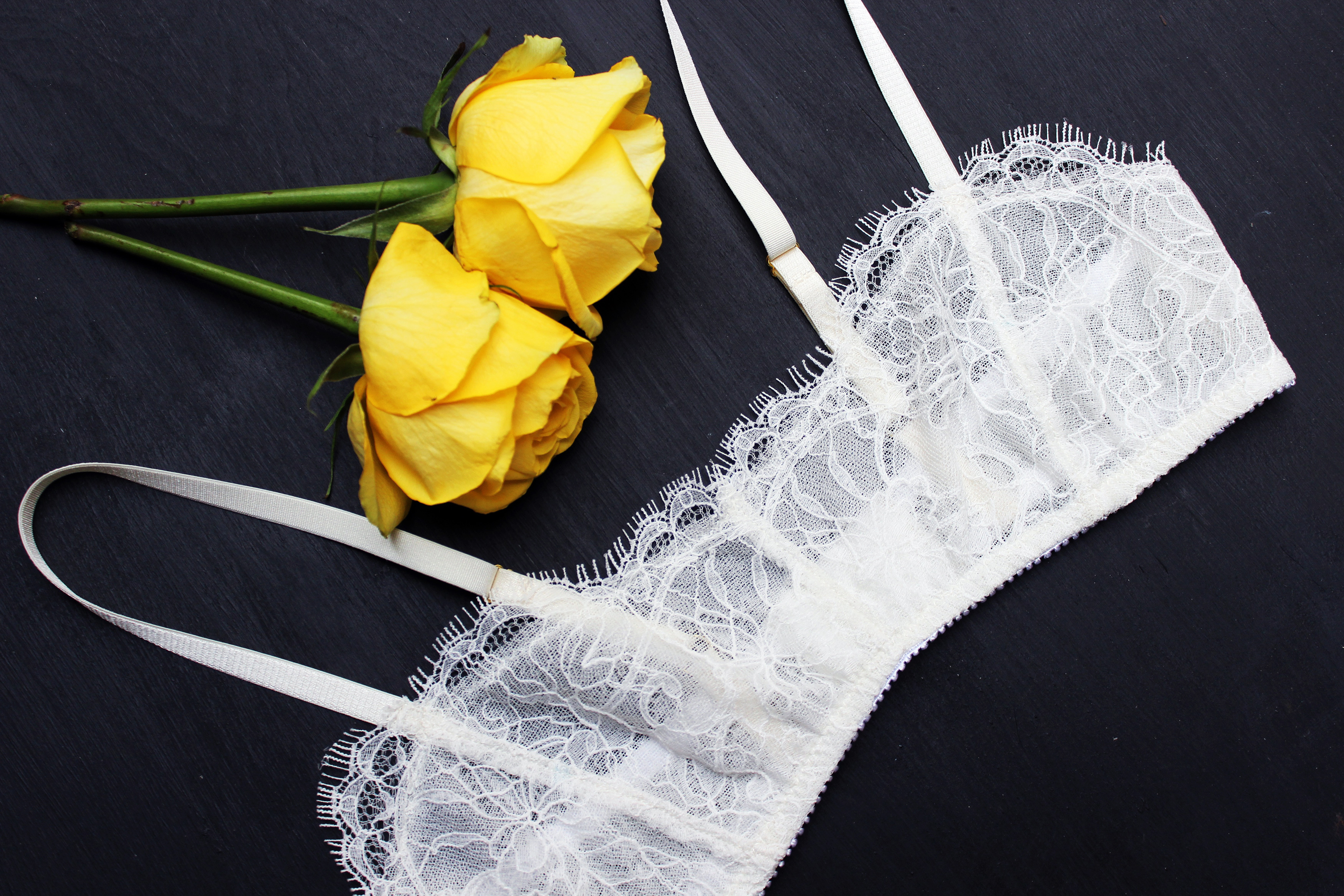 Unlike the other bralettes that I’ve made, this one is made with a non-stretch lace. It only has mechanical give, which means the front part of the bralette is pretty stable and doesn’t really stretch. 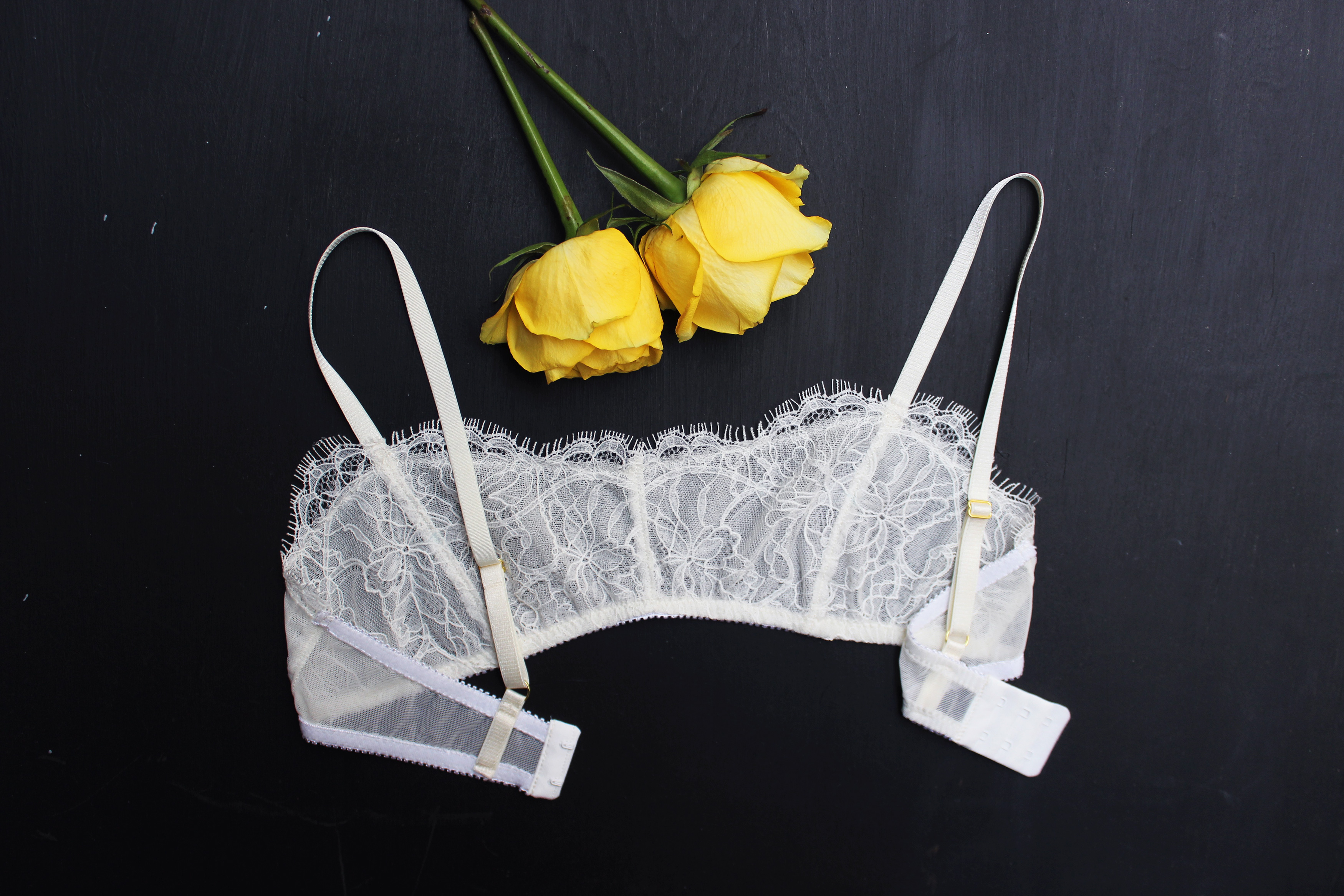 The back part of the bralette is made from stretch mesh so it can stretch around the body when worn. 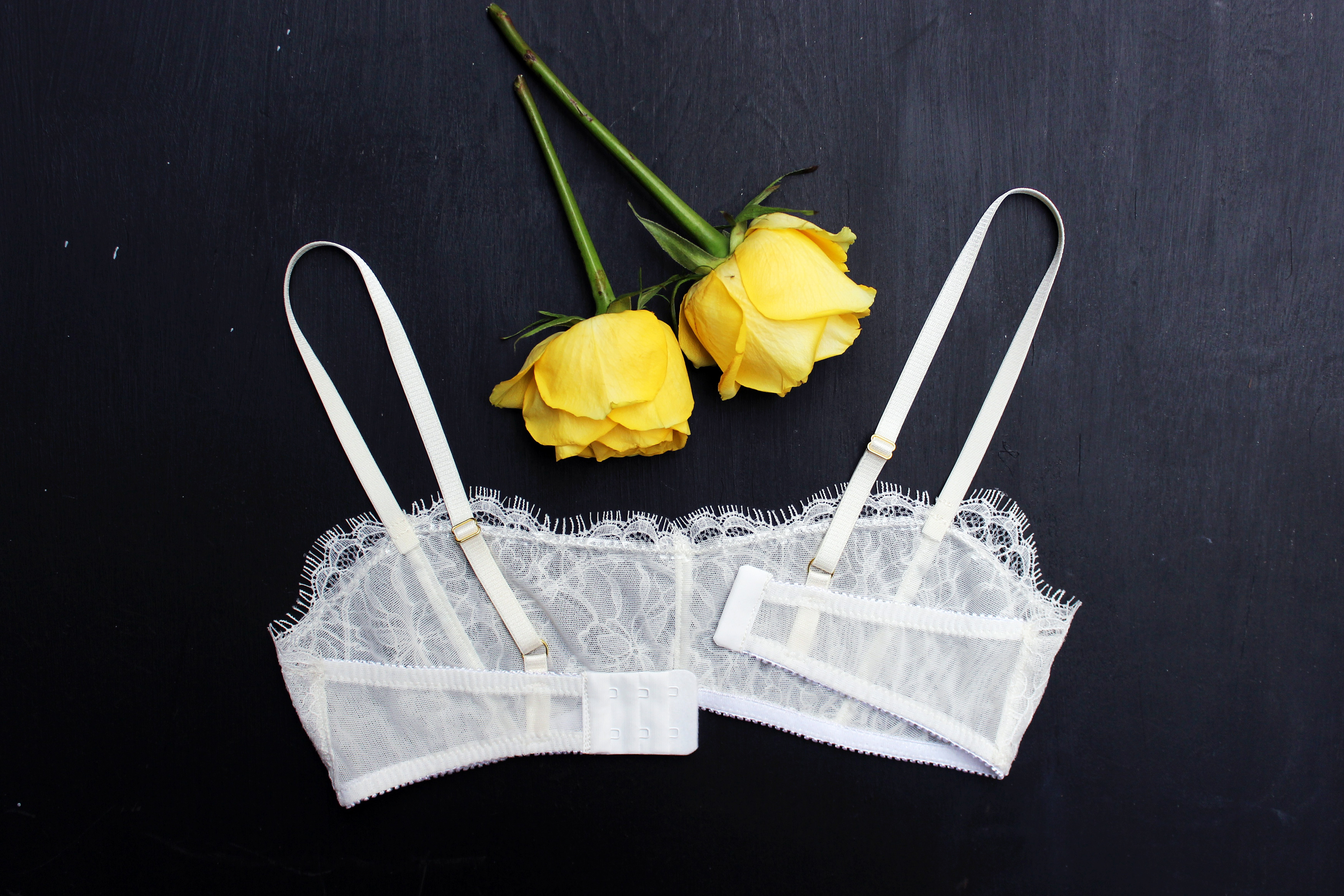 The straps are set further apart than usual, like that of a balconette bra.

What do you guys think about this style? 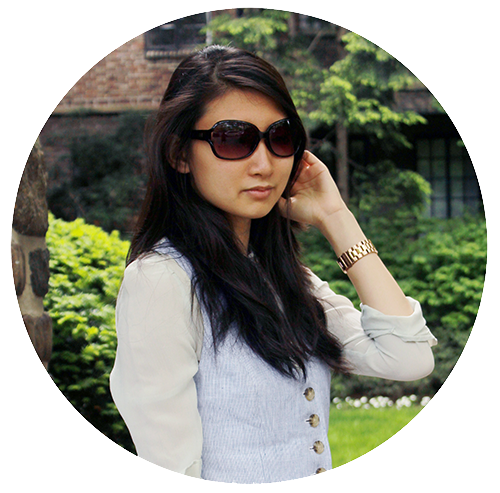 Learn How to Sew Bras

Any cookies that may not be particularly necessary for the website to function and is used specifically to collect user personal data via analytics, ads, other embedded contents are termed as non-necessary cookies. It is mandatory to procure user consent prior to running these cookies on your website.